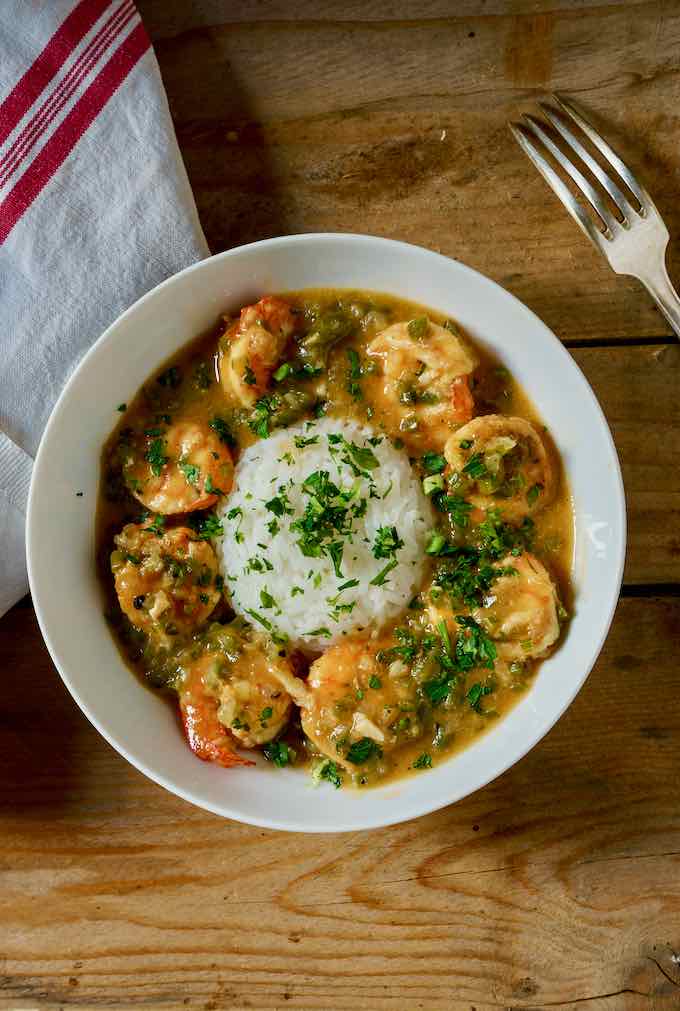 Étouffée is a crayfish (crawfish) or shrimp stew typical of the city of New Orleans, Louisiana. The étouffée name comes from the French, it is a culinary term indicating slow cooking in a pot or Dutch oven with a lid.

In New Orleans, the name can be written with or without accent (etouffee). This crawfish etouffee or shrimp etouffee is directly associated with Cajun and Creole cuisines. This crustacean stew is traditionally accompanied by white rice just like other dishes emblematic of the region; gumbo or jambalaya. This cooking technique is also found throughout Mississippi, Alabama, Florida and eastern Texas. The French name of the dish gradually disappears when heading north in favor of the word smothering.

How to make étouffée

The preparation of the stew begins with the Holy Trinity, a real marker of New Orleans cuisine. Like the Italian or Spanish sofrito, the holy trinity is a mixture of finely chopped very aromatic vegetables serving as a basis for making most of the stews.

If the sofrito prepared in Europe is generally made of celery stalks, onions and carrots, in New Orleans the carrot is replaced by bell pepper which also brings a sweet touch to the dish.

However depending on the regions of Louisiana, this Holy Trinity may vary and may or may not contain garlic, carrots, green onions rather than white, and red bell peppers rather than green. This mixture is sweated with butter or oil and can be later topped with garlic and herbs.

In the case of the étouffée, a Cajun spice blend is added. It consists of dried herbs such as thyme and oregano, garlic and onion powder, paprika , black pepper, mustard, pepper and cumin.

The tails of crayfish or shrimp are then added. In the case of fresh crayfish, it will be necessary to remove the casing (which gives a bitter taste to the crayfish if it is not removed). The heads and shells of crayfish and shrimp can be used to prepare broth for later.

Once everything is sautéed, you may add the sieved flour. To be more digestible, this flour can be toasted in the oven or in a pan beforehand. Adding the flour helps bind the stew. The molecules of the flour having the property of swelling in contact with a hot liquid, this will give a better density to the sauce.

The hot broth is then added to prevent clumping. The cooking continues until thickening and optimal cooking of all elements. Simply season the stew with salt and pepper and serve with a white rice and some finely chopped parsley. 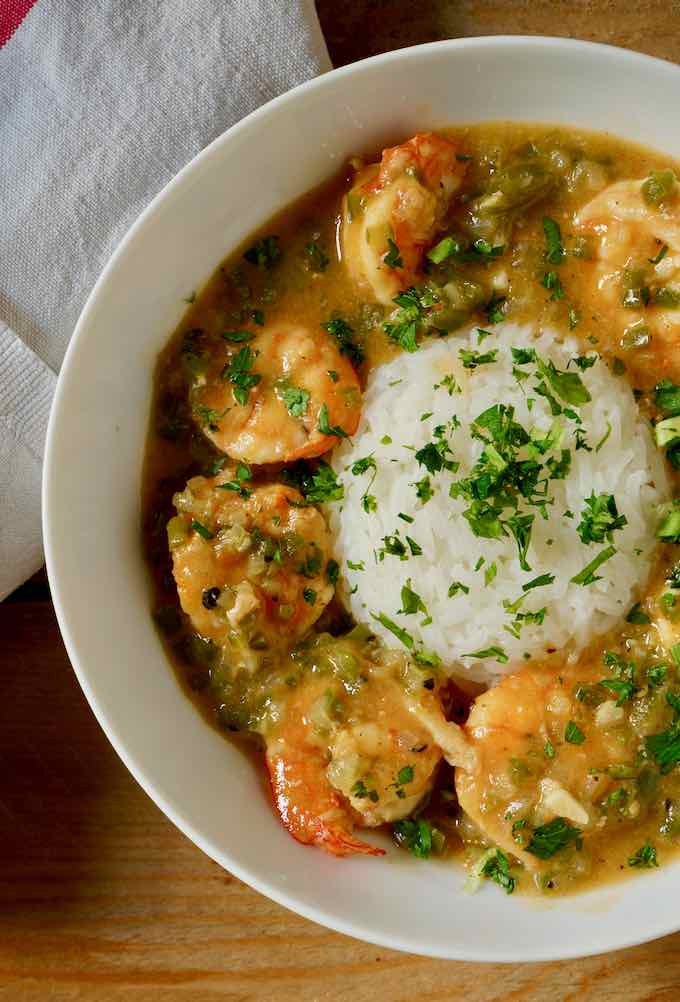 What is the origin of étouffée?

The recipe may date back to the 1920s, and is very popular with Cajuns living in the Bayou (Louisiana marsh area). In the 1950s, the recipe gradually evolved into certain Breaux Bridge restaurants and then in 1983, a waiter at the famous Galatoire’s restaurant on Bourbon Street had his boss taste the dish, and it was an instant hit.

Today the étouffée is very popular with New Orleans residents and tourists and is on the menu of most restaurants. The name of the dish suggests a French influence as often in the New Orleans cuisine. In France, there are numerous preparations of stewed crayfish or gambas. They are usually garnished with tomatoes and do not contain spices except a little allspice.

What are the variants of étouffée?

If the stew is almost always prepared with shrimp or crayfish, there are other versions based on frog legs or chicken. If crustaceans are often appreciated cooked in court-bouillon and tasted cold with mayonnaise, they are excellent in a stew too.

The combination of shrimps, rice and spices is also reminiscent of the famous Spanish paella. Spanish cuisine is also very influential in Louisiana, as this region has many immigrants from islands off the east coast of the United States of America who were former Spanish colonies.

This dish can also be prepared by starting with a roux, a mixture of butter and flour that will be cooked until it takes on an amber hue. It is in this roux that the vegetables and crawfish tails will be cooked. This method will bring the same result, that is to say a dense and unctuous sauce.

The technique of the roux is very used in the New Orleans kitchens. Roux is available pre-made in boxes and different shades, from white to black through all shades of blond, amber and red. The longer the flour is cooked, the darker the blond roux (used for the famous bechamel sauce) will become dark and the stronger its taste will be. In Louisiana, gourmets appreciate the very brown and black roux. The color of a roux affects the final color of a dish. 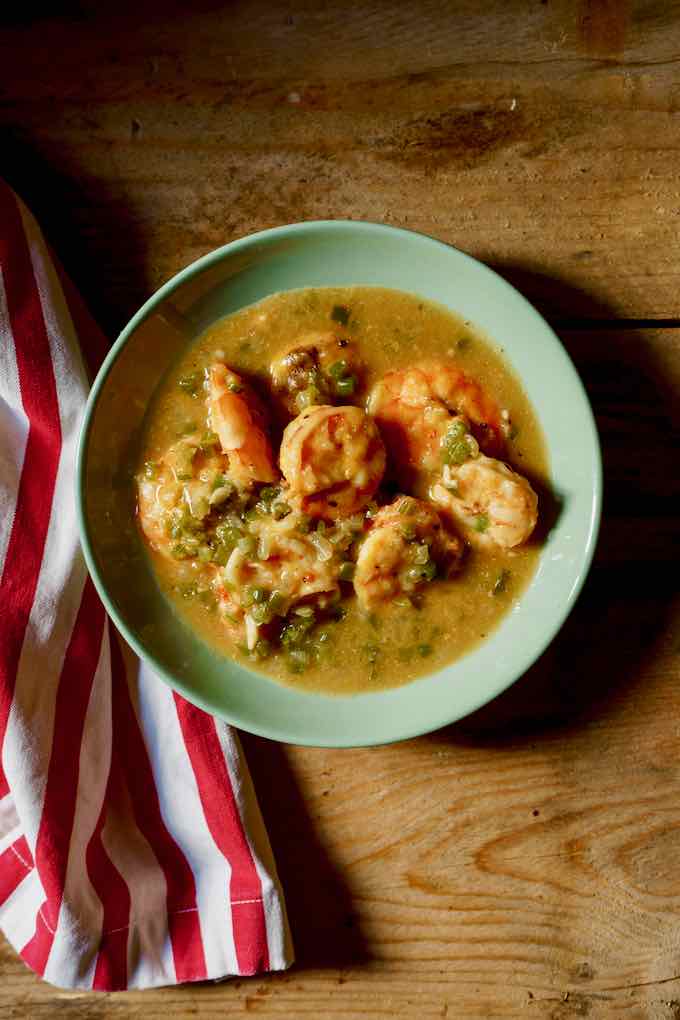 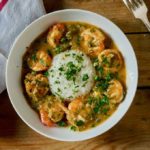 Étouffée is a delicious traditional Louisiana dish with crayfish tails cooked in a tasty butter sauce with herbs and spices.

It is possible to prepare the crawfish broth with the leftover heads and shells. Just rinse them, boil them for 30 minutes and filter.

Esther and Morgan are the two foodies behind Renards Gourmets. They are based in Paris where they develop four-handed recipes and culinary photos.