A creamy 7 ingredient sauce with hints of dark coffee flavor, red eye gravy is the perfect pick-me-up to add to your breakfast of freshly pan-fried country ham. 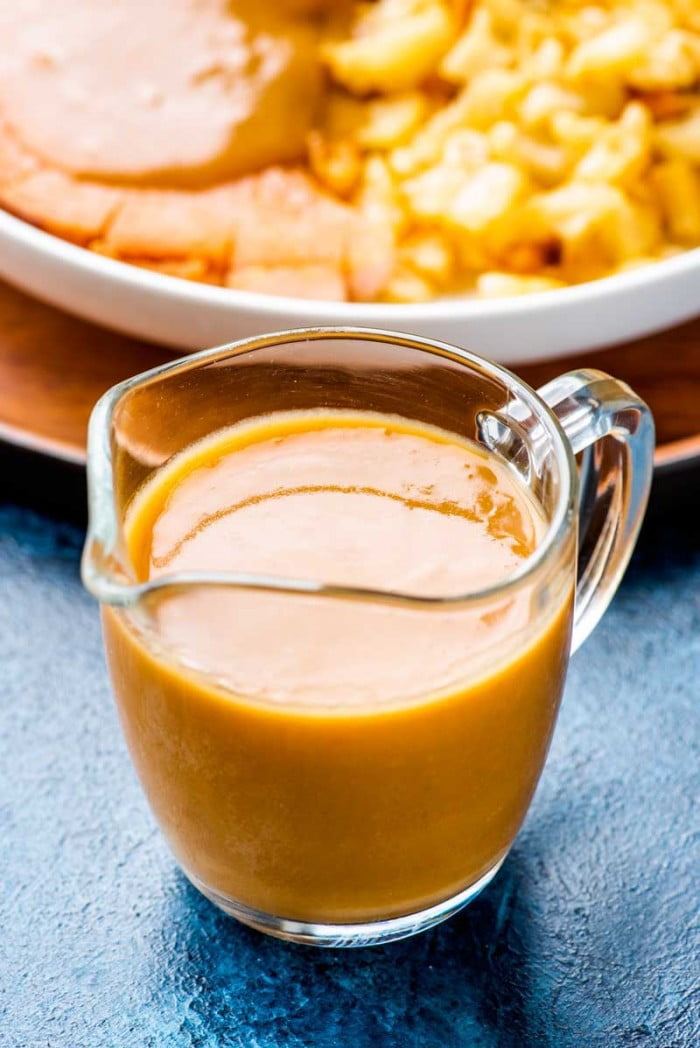 Some mornings aren’t complete without a pick-me-up, and red eye gravy delivers just that.

Because not only is this gravy a delicious addition to any breakfast, but there’s also coffee in the gravy itself. Yes, actual coffee. And it’s the combination of the coffee and ham that gives this gravy its trademark flavor.

What is red eye gravy?

Red eye gravy is a butterscotch-colored gravy made by adding liquid (typically brewed coffee) with the fat cooked from ham.

Why is red eye gravy called that?

This gravy goes by many names, from bird eye gravy to poor man’s gravy to red ham gravy to muddy gravy. But from where I’m from, it’s only known as (yet another) southern tradition.

One might think the “red eye” name comes from the coffee (like a staying-awake reference) but it actually comes from the original way this gravy was prepared. In the first few recipes, the grease and coffee would interact with each other, causing what appeared to be a red human eye to form in the pan.

But if you find the idea of your gravy staring back at you a little unsettling, then I have good news! The recipe featured here has been modernized a bit (to give it a thicker consistency) so you won’t see that reaction if you follow these instructions. 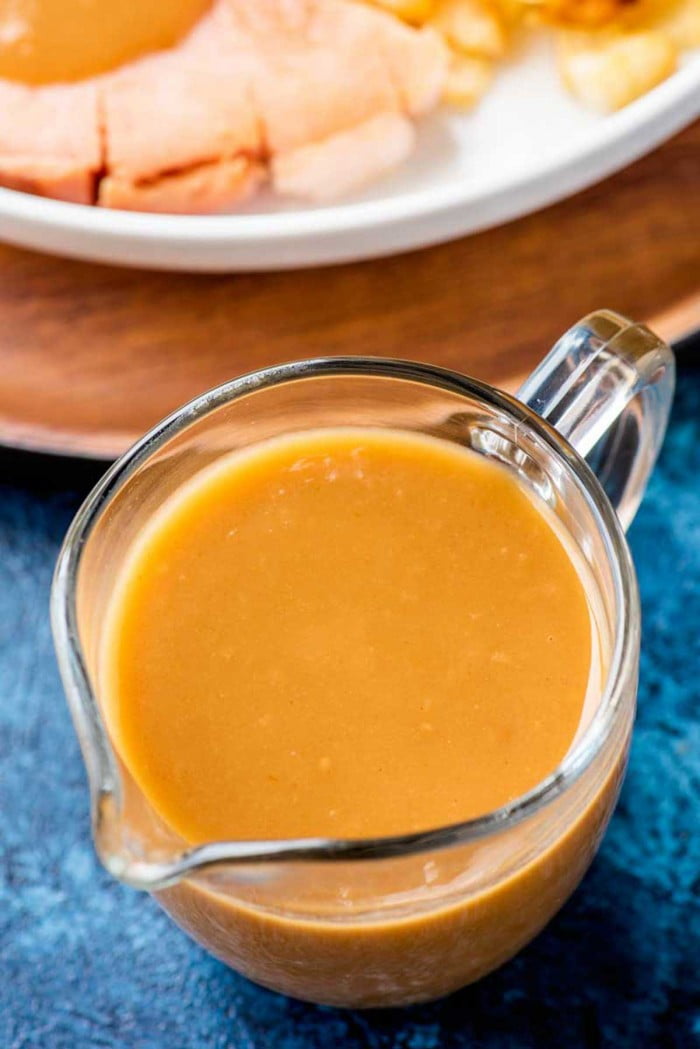 Thanks to the ham and the brewed coffee, this gravy tends to have a rich, dark, and salty taste. It’s typically served with a freshly cooked country ham, mixed with shredded potatoes, or sopped up by biscuits.

What kind of pork should you use?

When you’re out shopping, be on the lookout for a country ham steak. They’re typically oblong cuts of pork that are about 3/4 inch thick. There will be bone-in and boneless varieties, and the width may vary, too (just as it does for a full ham). Many country ham steaks are also smoked for a little extra flavor.

The exact type and size of steak you buy is totally up to you, but as long as you’ve chosen a “real” slice of pork (nothing pressed or pre-cooked) it will work well for making this gravy.

Can you use a different type of meat?

Country ham is the traditional pairing with this gravy, but in theory, you “could” use a different type of meat…  BUT it would have to be a meat that’s known for leaving a greasy, flavorful residue in the pan after cooking.

Which, of course, narrows your options down to just another cut of pork. Lean cuts of chicken can also be used.

All that being said, bacon is the most common substitution I’ve seen, with boneless and skinless chicken thighs coming in as a close second. I’ve never made this recipe with bacon or chicken before, so unfortunately, I don’t have many suggestions on how this recipe would work when substituting with them. 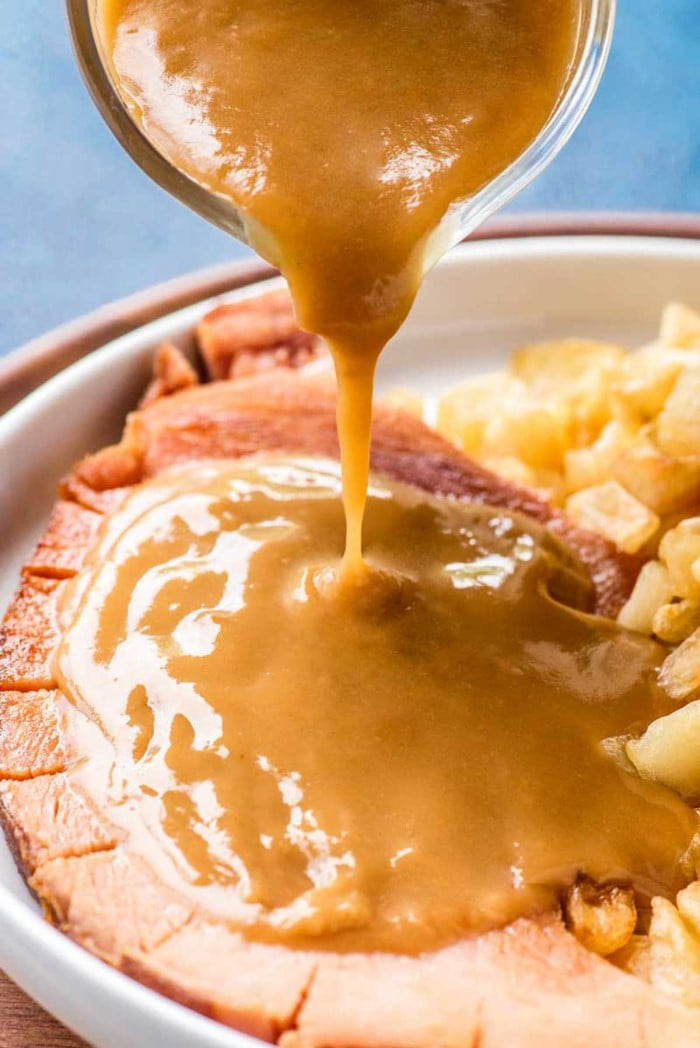 Once prepared, this gravy can be stored in a sealed container in the refrigerator for up to three or four days.

Can you freeze red eye gravy?

Yes, you totally can!

Once prepared and cooled, this gravy can be stored in a sealed container or freezer bag for up to four months.

How to make red eye gravy

This next part is only a photo tutorial of the recipe steps. If you’re looking for the full recipe measurements and instructions, scroll down to Recipe Details.

Step 1 – In a large skillet, brown both sides of a country ham steak. The goal is to cook the steak to your desired doneness while also leaving a tasty residue in the pan. Once cooked, place the ham on a plate and cover it to keep it warm.

Step 2 – Melt some butter in the pan, then add flour. Use a whisk to mix and gently scrape the pan, absorbing the butter and some of the ham residue.

Step 3 – Pour a small amount of bone broth in the pan, then quickly whisk it in with the flour mixture until the broth is absorbed. Add a little more broth, then whisk again. Repeat this process until all the bone broth has been added and the flour mixture has completely absorbed into a smooth, creamy sauce.

Step 4 – While continuing to whisk the sauce, add the brewed coffee, sugar, and salt. Mix until combined, then continue to cook, stirring occasionally, until gravy starts to simmer. Remove skillet from heat and transfer gravy to a gravy boat or serving cup. 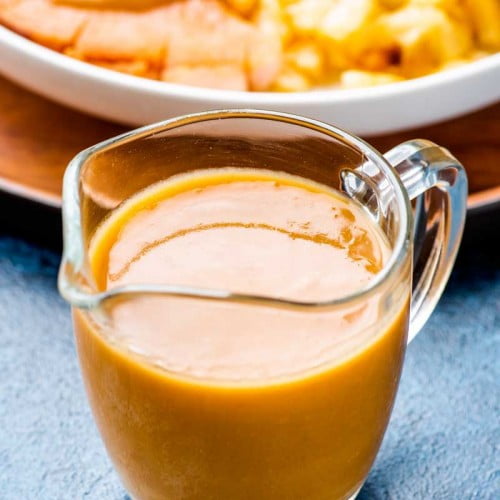 Ultra creamy and with hints of dark coffee flavor, red eye gravy is the perfect pick-me-up to add to your breakfast of freshly pan-fried country ham.

Recipe should make slightly more than 1 cup red eye gravy (depending on thickness).

I do my best to provide nutrition information, but please keep in mind that I’m not a certified nutritionist. Any nutritional information discussed or disclosed in this post should only be seen as my best amateur estimates of the correct values.